Today the Holy Orthodox Church commemorates St. Sava of Serbia.
Sava was born Prince Rastko Nemanjic, the son of Stefan Nemanja, the Serbian ruler and founder of the medieval Serbian state. His brother, Stefan Prvovencani, was the first Serbian king. Rastko Nemanjic was born in either 1175 or 1176.
In the early 1190s, the young Rastko left home to join the Orthodox monastic community on Mount Athos. Taking monastic vows, he was given the name Sava (Serbian form of Sabbas) in honour of St. Sabbas. Initially, he joined a Russian monastery, but then moved to the Greek Vatopedi Monastery. At the end of 1197, his father, Grand Prince Stefan Nemanja, joined him. In 1198, together they moved to and restored the abandoned Hilandar monastery, which at that time became the center of Serbian Orthodox Christian monastic life.
St. Sava's father took monastic vows under the name Simeon. He died in the Hilandar Monastery on February 13, 1200. He is also canonized as Saint Simeon.
After his father's death, Sava retreated to an ascetic cell in Kareya which he built himself in 1199. He also wrote the Kareya and Hilandar Typika. The last Kareya typikon is inscribed into the marble board at the ascetic cell. He stayed on Athos until the end of 1207.
When Sava entered his native land in 1207, he unfortunately found the country just as Simeon had informed him in his dream—in total disarray. The Serbian state was split in two. By secret negotiations with Hungary and Pope Innocent III, Vukan, the eldest of the three brothers, who was bitter over the appointment of his younger brother Stephen as heir to the throne, was able to amass troops and capture Zeta; he then was set to launch a Raška, Stephen's portion of the divided kingdom. This civil war was only a microcosm of a larger conflict instigated by the West—that is, the hostilities initiated by the Great Crusades of the Latin church. In 1204, the soldiers of the Fourth Crusade captured Constantinople and much of the territory of Byzantium, including the Holy Mountain. In 1205, the Holy Mountain was officially placed under the authority and jurisdiction of a Roman Catholic bishop. It is believed that this occurrence was the most influential factor in Sava's decision to return to Serbia. Hence, the Saint returned home with his work cut out for him.
When he returned, Sava brought with him the medicine to heal the entire situation: the relics of his father, the Grand Župan and saint, Stephen Nemanja—Simeon the Myrrh-flowing and co-founder of Hilandar. Upon entering Studenica Monastery, St. Simeon's foundational monastery, Sava invited his two brothers to a proper and rightful memorial service for their father. As the casket was opened, before their eyes the body of their father was found to be sweet-smelling, exuding a fragrant oil and myrrh, warm and aglow, looking very much alive, as if he were only restfully sleeping. This act of veneration of their father was the first in healing the fraternal schism between Vukan and Grand Prince Stephen. Shortly thereafter, the civil war was halted and a peace agreement was drawn up, once again restoring the kingdom of Serbia as it was under the reign of the great ruler Stephen Nemanja. In discussions with his reunited brothers, Sava also designed plans for an immediate, systematic, and far-reaching missionary to save the Orthodox souls of the Serbian people. Studenica Monastery, with St. Simeon's relics making it a national shrine, was chosen as the outreach station for all activities. Sava vas appointed Archimandrite of Studenica. St. Sava wrote the Monastery's Typikon, which strengthened Studenica's monastic life.
St. Sava managed to persuade the Patriarch of Constantinople, who was residing in NiceaSerbian Church in the year of 1219. At Patriarch Manuel's request, Sava was selected to be elevated to Archbishop. At first, Sava vehemently refused this offer on the grounds that he was truly unworthy for such a position and calling. He offered several of the monks from Hilandar who were present as potential candidates for the position. In the end, Sava accepted and was consecrated in Nicea on the Feast of St. Nicholas, December 6, 1219, becoming the first Archbishop of the newly autocephalous Orthodox Church of Serbia. He was 44 years old at the time. since Constantinople was under Latin rule until 1261, to establish the independence of the
The following are the exact words of the Greek text of Patriarch Manuel's decree elevating Sava to Archbishop, thus granting autocephaly to the Serbian Church:

I, Manuel, the Ecumenical Patriarch and the Archbishop of the City of Consrantinople, New Rome, in the name of our Lord Jesus Christ, have consecrated Sava, Archbishop of all the Serbian lands, and have given him in God's name the authority to consecrate bishops, priests, and deacons within his country; to bind and loose sins of men, and to teach all and to baptize in the name of the Father, and the Son, and the Holy Spirit. Therefore, all you Orthodox Christians, obey him as you have obeyed me.

After his consecration, Sava returned to the Holy Mountain in order to say farewell to Hilandar and to receive the blessing and prayers of the entire monastic community of the Holy Mountain.
The newly consecrated Archbishop Sava then traveled by boat to Thessalonica, where he tarried awhile at Philokalos Monastery. At Philokalos, he, along with a few others, made a translation from Greek into Slavonic of the Byzantine ecclesiastical law book The Rudder or Nomocanon of St. Photios the Great (9th century). Called KormchajaKnjiga ("Book of the Pilot") in Slavonic, this translation contained not only the ecclesiastical canons—including the dogmatic decrees of the seven Ecumenical Councils—with commentaries by the best medieval Greek canonists, but also numerous precepts of the Fathers of the Church and several of the imperial edicts of the great Byzantine Emperor Justinian (6th century). 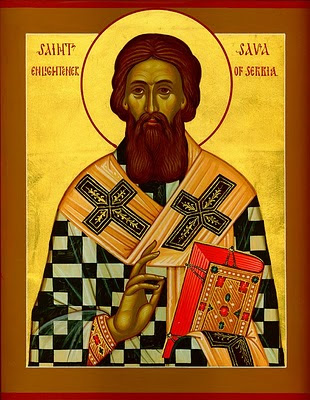 Thou wast a guide to the Way of Life, a first Hierarch and a teacher;
thou didst come and enlighten thy home country, O Sava,
and give it rebirth by the Holy Spirit.
Thou hast planted thy children like olive trees in the spiritual Paradise.
O Equal-to-the-Apostles and Saints, pray to Christ our God to grant us His great mercy.

As the first great hierarch and co-worker with the Apostles,
the Church of thy people magnifies thee;
and since thou hast found favor with Christ,
save us by thy prayers from every calamity,
so that we may proclaim to thee: Rejoice, God-wise Father Sava.

O guide of Orthodoxy and blessed teacher of virtues,
purifier and enlightener of thy homeland,
beauty of monastics,
most wise Father, Holy Sava,
by thy teaching thou didst enlighten thy people,
O flute of the Spirit, pray to Christ God for our souls.

Email ThisBlogThis!Share to TwitterShare to FacebookShare to Pinterest
Labels: St. Sava of Serbia

Ignaty
Northwest Arkansas, Arkansas, United States
My name is Ignatios Jason Rogers and I was received into the Holy Antiochian Orthodox Church at St. Nicholas in Springdale, AR on Christmas Eve of 2006. I am currently seeking the monastic path and hopefully one day will be able to enter a monastery.